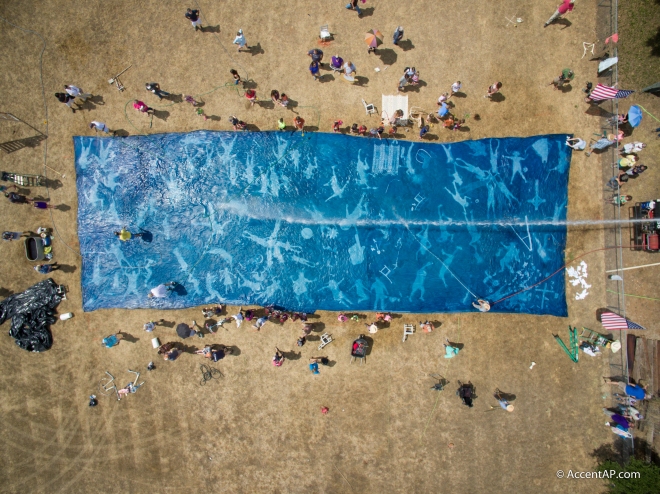 On September 19, 2015, the first official World Cyanotype Day, shootapalooza artists, along with friends of the A Smith Gallery, stretched out a whopping big piece of blue cloth and jumped on top of it.  Ten minutes later, the Johnson City Texas Volunteer Fire Department turned on the hose of its big pumper and began the rinse.  The resulting cyanotype, thirty feet by ninety, ten yards by thirty, twenty-seven hundred square feet, takes the bacon, so to speak, and reigns as world’s largest.

First and foremost, our thanks go to Amanda Smith and Kevin Tully for hosting the event in their gallery and in the town of Johnson City, Texas.

Carol Surer compiled and composed a SmileBox collage from the event.

Kevin Tully wrote a beautiful postscript to the day which was published in the October 17th issue of LenScratch. Thank you Kevin and thank you Aline.

Prior world record Largest Cyanotypes were set by JJ Hastings and the Newspace Center for Photography in Portland on August 23, 2015: one hundred forty square yards,

and Melanie King, Constanza Isaza Martinez, and Andres Pantoja for The Wellcome Trust, London on May 2, 2015:  one hundred thirty-five square yards.

Kevin Tully kindly compiled a list of thank yous to those who participated in the Johnson City adventure.  It was a tremendous team of volunteers.

Kevin wrote, “this would have never happened without the hard work and contributions of:

The City of Johnson City — The ground on which to proceed

DorRae Stevens — Seamstress and Wrangler and Mover and Cleaner

Robin Foote — Wrangler and Hose Wielder and Mover and Cleaner

Lynda Martin — Wrangler and Photography and Mover and Cleaner

Al Staehely — For the use of the historic Sam Houston Johnson house here in JC as an artist residence.

And, all the kids and grownups of Johnson City and beyond who sacrificed a Saturday in the stifling heat to make us laugh, cry and celebrate. Thank You.